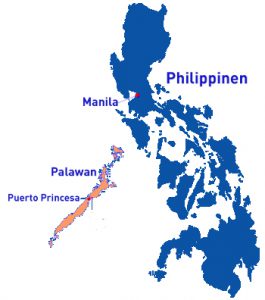 Liveaboard Diving choose Palawan as it’s home port to operate Scuba Diving Palawan from Puerto Princesa and El Nido. Palawan is not only famous for it’s underwater world, it is also the green jewel of the Philippines. A nature paradise, untouched jungle covers a majestic mountain chain which ranges over the 430-km long and approx. 40 km wide Main Island.Because of its untouched nature Palawan is often called “The Last Frontier”.

The capital Puerto Princesa with its approx. 200,000 inhabitants is for the visitors the gateway into the tropical wilderness of Palawan, to the famous Underground River and also to El Nido. The diving districts around Palawan still belong to the well kept secrets of the worldwide diving areas. The water temperatures are rarely below 25 degrees Celsius and the fantastic biodiversity of the ocean lets every diver’s heart beat faster. Liveaboard Diving Philippines will make your diving vacation an unforgettable experience.