Dive trip to the Philippines, this time Coron Bay 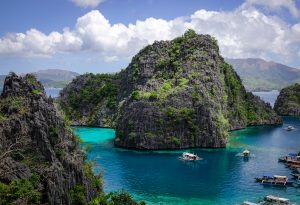 Dive trip to the Philippines, this time Coron Bay

Hello dear diving friends, here I am again. As you know, I have been spending my dive trip to the Philippines regularly for almost 15 years. In this article you will learn how it went after the first time. Again, the note, please do not take anything that is written dead seriously, I am not affected by the correctness of all information. 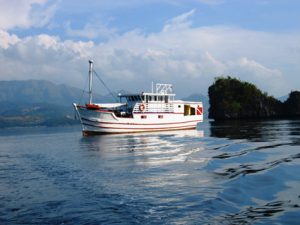 In 2005 it was time again to go to the Philippines, this time it should be a combination of different destinations for my dive trip to the Philippines. Arrived in Manila we went by air to Busuanga. The goal was Coron Bay with its wrecks from World War II. Arriving on the M / Y Maribeth we realized that we are the only two guests and have the whole ship for us. During the dives we concentrated mainly on the wrecks. By the pearl farms, the view in the Coron Bay was rather modest, often she was better at or in the wrecks. Sometimes, with our guide, we dare to venture far into the wreckage. In addition I have to say this is only for very experienced divers.
The ship was very simple, electricity was only available when the engine or the generator was running. In the evening we ate on the foredeck by the light of a kerosene lamp. We slept, if possible under the open sky, this is the first time I really noticed what light pollution means. Here there was no light overload, often the only artificial light was our anchor light. I have never seen so many stars in my life and experienced such quiet nights. 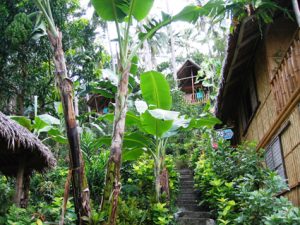 After a week in Coron Bay we took the plane back to Manila and then by car and ferry to Sabang in Coco Beach. The resort is quite outside of “Sabang village”. The bungalows stood in a slope lined with many palm trees, of course, the Swiss had once again “luck” and got the two highest. Are we mountain goats or something? The view was fantastic, only the about 300 steps up were fierce. In any case, we quickly learned to always take along as what we needed the long day. None of us felt like going back to the bungalow a second or third time to get the forgotten one. The bungalows had a very special feature, always 5 – 6 bungalows were cared for together by a service family, these lived not far from the bungalows own house. The bungalows were connected by a leash with the service house, pulled strongly on the leash rang a bell and immediately someone came up and asked what you would like. Great service in the simplest way. 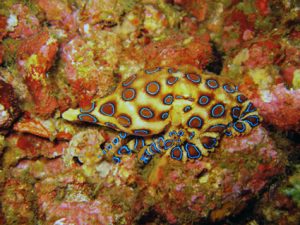 Where is the dive site?

The resort was not the “diving resort”. Often we were the only ones who wanted to dive. But that also had its advantages, we were able to determine predominantly where to go, except for the one time where the base manager suggested us to go to the dive site Canyons and make a free water descent to about 25m. Okay. Arrived at the canyons it was called into the water and down to 25m. Only arrived at 25m there was no reason to see far and wide, so further down 30, 35, 40m and lo and behold suddenly there was reason. We looked at each other for a moment, all right? Yes! Against a fairly strong current, it went slowly up to the reef. Once there, there was a breather, in which we were surrounded for the longest time by a large school of fish. After the dive, the headmistress said, “I’ve probably lost a few yards”. We only grinned.

Conclusion, I am not “the wreck diver”, but the journey was worth it, the wrecks are partly very well overgrown. The Coco Beach was a bit far away from the center of Sabang. You can only get there by boat or a long walk. So it was a bit of a hassle when drinking out or eating out.

But now enough of this dive trip to the Philippines more to come soon.

If you are interested in more information about diving in the Philippines, here are some more links:

Scuba Diving in the Philippines